Get your order of Rugby Balls at the right price - delivered Australia-wide. Click the images for costs of balls including logos or message.

Our range of Promotional Rugby Balls covers all options - size 5,4,3,2 and mini (152mm). We cost these Rugby balls with a standard 2 ply bladder and with a PVC (shiny or matt) finish. You can also have them in a rubberised finish - which costs a little more - just ask for a quote! We are proud Australian Distributors of one of the fastest growing brands of sports balls in the world - SPORTS1. Specialising in custom made and promotional balls - covering many sports, not just Union, such as AFL, League, Netball and Volleyball SPORTS1 Balls feature your branding and colours - not the colours and brand of the manufacturer - the whole point of buying these balls is to make bulk savings and promote your club or company at the same time! 95% of sports balls sold in Australia are manufactured in India or Pakistan, SPORTS1 have a small network of premium partner factories in India - each specialising in different ball types to ensure that you get the very best quality supplies. You can expect to have your order of Custom Rugby Balls in your hands in around 5-6 weeks from your order placement.

Our SportsBalls.com.au staff are ready for your questions - please call us at with your query - our staff are here to assist you with your enquiry and order. Remember - we are the nation's best value supplier and will not be undersold on a comparative specification of ball! 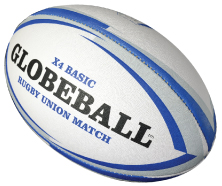 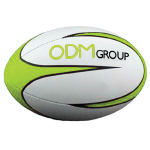 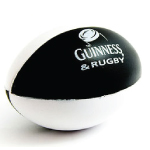 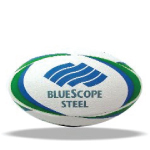 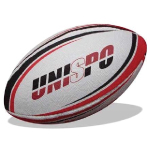 You can see here the SPORTS1 brand Mini Rugby ball - me ...

As mentioned, all of the sports balls that we offer from SPORTS1 come from India from premium quality factories. As most people understand the cost of manufacture in India (and elsewhere in Asia) is considerably lower than here in Australia and these cost savings are directly passed on to you thereby boosting your club's coffers or marketing budget. When you place your order of balls the order process works like this:

1/ Receive your quote from SportsBalls.com.au - get your quote in 2 hours or less! 2/ Place your order using our online order form. 3/ Send your artwork and within 2 days we will send you a proof to check over. 4/ Advise us of any changes to design (which we will re-proof) and approve final design for production. 5/ Factory starts making your order. 6/ Delivery occurs around 5 weeks later to your address in Australia (delivery to WA and country areas may take a little longer. 7/ Play hard!

Rugby - the game played in heaven!

Rugby Union is one of the premier sports played in Australia, and has a national team that competes at the highest possible level.

The first recorded rugby football international took place on 27 March 1871. The match was played between Scotland and England, with both nations featuring representative teams, the mighty Scots won. However by 1881 both Ireland and Wales also had their own representative teams, and thus in 1883 the first international competition was formed. 1883 was also the year of the first 'rugby sevens' tournament, the Melrose Sevens, which is still held every year. During 1888 two overseas tours took place; a British Isles team visited Australia and New Zealand-although a private venture, it laid the foundations for future British and Irish Lions tours, a tour just recently completed; and the 1888-89 New Zealand Native football team brought the first overseas team to British spectators.

Rugby Union features an oval shaped ball, typically made of leather previously but in modern times has been made from a synthetic material that allows for a better grip as well as a more durable build.

Easily played just about anywhere with just a ball, this game has one of the largest following of any sport in the nation, and is played across most states at a professional level.

We look forward to helping with your order of Branded Promotional Rugby Union Balls.