Get the right AFL Balls at the right prices - delivered Australia-wide. Click the images for pricing of balls including including logos or message.

Our range of Aussie Rules Balls covers all options - size 5,4,3,2 and mini (152mm). We cost these AFL balls with a standard 2 ply bladder and with a PVC (shiny or matt) finish. You can also have them in a rubberised or leather finish - just ask for a quote! We are proud Australian Distributors of one of the fastest growing brands of sports balls in the world - SPORTS1. Specialising in custom made and promotional balls SPORTS1 Balls feature your branding and colours - not the colours and brand of the manufacturer! 95% of sports balls are manufactured in India, SPORTS1 have a small network of partner factories - each specialising in different ball types. You can expect to have your order of Promotional AFL Balls in your hands in around 5-6 weeks from your order placement.

Our SportsBalls.com.au staff are ready for your questions - please call us at with your query - 1300 303 717 our friendly staff are here to assist you. Remember - we will not be beaten in price but please compare apples with apples if you are shopping around! 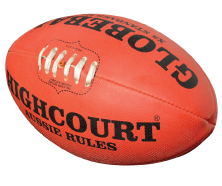 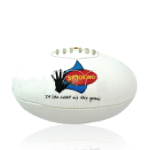 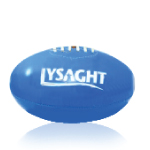 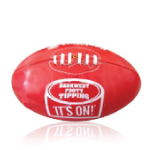 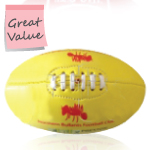 You can see here the SPORTS1 brand Mini Promotional AFL ...

All of the sports balls that we offer from SPORTS1 come from India. Obviously the cost of manufacture in India is considerably lower than here in Australia and these cost savings are passed on directly to your club or company. When you order your promotional balls the order process and time frame works like this:

1/ Receive your quote from SportsBalls.com.au - get your quote in 2 hours or less! 2/ Place your order. 3/ Send your artwork and within 3 days we will send you a proof. 4/ Make any changes to design and approve for production. 5/ Balls go into production. 6/ Delivery occurs around 4 weeks later to your address in Australia. 7 Play hard!

We look forward to helping with your order of Custom Promotional AFL Balls.

AFL is short for the Australian Football League, the premier competition of Australian Rules Football in the nation.

AFL is one of the most watched sports in the nations, and features a representative team from nearly every state. Commonly voted the most popular sport in the nation, AFL has consistently grown in the national consciousness through its extensive grassroots organisation commonly known as AusKick. Played in Australian schools and clubs all over the nation, Australian Rules Football has a standing above and beyond any other sport in Australia, with a recent survey rating the sport as the most followed sport in every state except Canberra and Queensland.

In 1858, Australian Rules Football was first officially played between Melbourne Grammar School and Scotch College, organised and refereed by Tom Willis. In 1859, the Melbourne Football Club drafted the first official set of rules that survive to this day: during this year, many clubs were developed including Geelong Football Club, one of the clubs that competes at the highest level in todays organisation. AFL is also responsible for helping to develop and grow indigenous interest in sports. As the sport with the highest level of indigenous participation in Australia, the grassroots development of AFL in rural areas has helped many outlying communities provide an active and productive outlet for their youth, and indeed many of the indigenous players in the competition today are regarded as some of the finest athletes ever to play the game. With notable examples of Cameron Ellis and Ashley McGrath, the level of participation in this sport is an indicator of its popularity all over the nation. Easily played in the park with just a ball, this game has the largest following of any sport in the nation, and is played across most states at a professional level.