Promotional Netballs for your Clubs or Corporate Promotion: Big Savings

Get the right Netballs, at the right price - delivered Australia-Wide. Click the images for pricing of balls including including your logo or message.

Our range of Netballs covers all standard sizes plus mini promotional sizes and grades. We cost our Promotional Netballs with a standard 2 ply bladder and a choice of material finishes - some cost a little more, some cost less - please just call our staff for the cost of a local call on the number above and ask what options are available for your club or promotion - our staff will send you an email written quote in a couple of hours (not day's like other suppliers!). Remember! - we are here to save you money so do not have costly reps in each state and city.

SportsBalls.com.au has a small dedicated team of staff members that are ready to help with your enquiry - please call us on the number you see above: we are here to help with your question and get order underway: making the experience easy and pain free. Please remember - sportsballs.com.au are the lowest cost supplier in the country. If you happen to chance upon a cost we would like the opportunity to make sure you are getting the same grade of Promotional Netball - if it is the same as ours we will better that price: GUARANTEED! 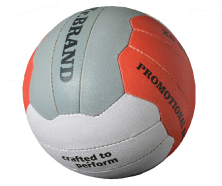 You can see here the SPORTS1 brand Promotional netball ...

How to order our Custom Netballs

As stated above: all of the balls that SPORTS1 manufactures come only from quality factories that have well earned reputation for good workmanship and balls. As most of us now appreciate the cost of making anything, not just balls, in India (and elsewhere in Asia) is substantially lower than here in Australia due to factors like lower labour costs. Our policy is that these savings are directly given to customers which allows you to maximise your club's budget or your marketing and promotional spend (and who doesn't appreciate that?). When you go-ahead and place your order of Footy Balls your order will progress like this:

1/ Receive your written quote by email - you will,usually, receive this in 2 hours or less! 2/ Place your ball order using our online form or by giving us a call on the number above. 3/ Send your artwork files by email to your appointed account manager, they will then call you to discuss your artwork and design requirements. Within 2 days we will email you a detailed proof for you to check over your design and colours. 4/ You can then advise us of any changes that you may like (we will then re-proof by email) and then approve final design layout for the factory to get started on. 5/ Factory gets your underway. 6/ Delivery usually occurs around 5 weeks later to your club or business (you can sometimes expect a little longer for remote areas or Western Australia). 7/ Play hard and have fun!

Promotion Products Pty Ltd are the only fully authorised Australian Distributors of one of the fastest growing brands of sports balls and equipment in the world - SPORTS1. Offering only custom manufactured and promotional sports balls - covering all of Australia's major sports, not only Netball, such as Rugby Union and League, Volleyball, AFL and Tennis SPORTS1 Custom Sports Balls feature your logo branding and Netball club colours or company branding - not the identity of the ball supplier! - we understand that the reason you are buying Promotional Netballs is so your club or company make bulk savings. Around 95% of all good Netballs balls offered here in Australia are made in either India or Pakistan, our supplier SPORTS1 utilises a small group of quality factories in India - each of these makes only one type of ball and are therefore experts in that field this guarantees that you get great quality balls everytime. You can when working with us expect to have your purchase delivered to your clubhouse or office around 5-6 weeks after order placement.

Netball is an extremely popular sport all over the nation, and has developed a national following at an incredible rate.

Netball is Australia's fastest growing grassroots sport, with hundreds of social teams and competitions springing up all over the continent every year. As one of the premier mixed social sports in Australia, it's no surprise that Netball is so widely played and has helped to grow the interest in the national and domestic competitions over the past few years.

With the development of this great game beginning in England in the 1890s, the game had gained standardised international playing rules by 1960 as well as forming the International Netball Federation . As of 2011, this extensive organisation consists of more than 60 national teams representing their countries in five different global regions.

Predominately played by women, Netball has started to attract many men to the fold, with the grassroots mixed teams developing male interest in the sport, as well as helping to grow the sport to a much wider audience all over the nation.

There are three major tournaments for netball that take place internationally: the World Netball Championships, the Commonwealth Games, and the World Netball Series. With a number of competitions available for young players, Netball has consistently been voted as one of the most encouraging and well set out sporting organisations in the world.

Easily played just about anywhere with just a ball, this game has one of the largest followings of any sport in the nation, and is played across most states at a professional level.

The staff here at sportballs.com.au look forward to assisting with your order of Branded League Balls.